At the European Robotics Forum (ERF2018), the most influential meeting of the robotics community in Europe, this year held in Tampere, Finland, from 13-15 March 2018, ROBOTT-NET participated manifold.

The project organised a well-received workshop “From Technology Transfer Initiatives to Digital Innovation Hubs” on 15 March 2018 together with similar projects such as ECHORD++, HORSE and ReConCell and participated in several other workshops.

This presentation was followed from an experience report by Jon Agirre Ibarbia of Tecnalia on “What Is Needed To Become a Digital Innovation Hub in Robotics” and about the approach by Basque Industry4.0 in Northern Spain.

As fourth speaker, Christoph Hellmann of Fraunhofer IPA showed latest findings from ROBOTT-NET in his presentation “From Tech Transfer to DIH in Robotics” based on 60+ voucher projects executed. Further results will be shown in a contribution to the 50th International Symposium of Robotics (ISR) June 20-21, 2018 in Munich, Germany. This was followed by a presentation on “Experiences from Technology Transfer in the HORSE project” by Panagiotis Bouklis of European Dynamics SA. The presentation part of this workshop finished with findings from Technology Transfer in the RECONCELL project by Franziska Kirstein of Blue Ocean Robotics. 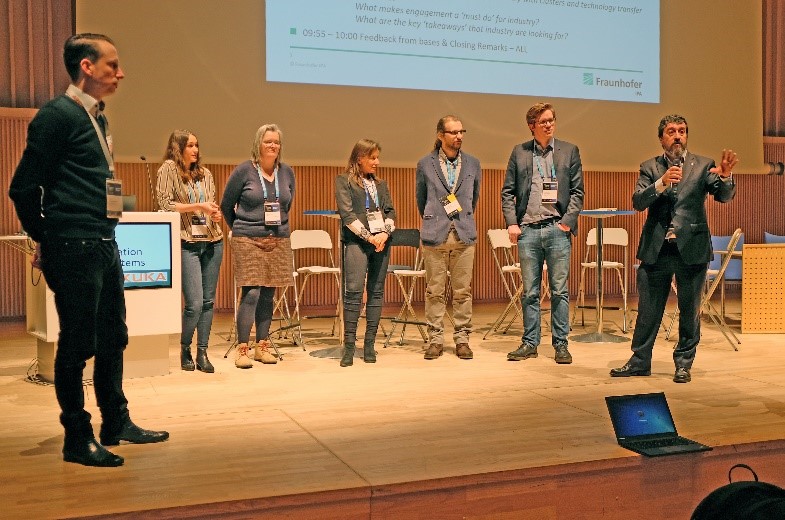 Even though the auditorium of the congress centre challenged the interactive part of the session, the workshop could generate a lively discussion between speakers and audience and the workshop received positive feedback from its participants. Questions being discussed included Technology Transfer Best Practice and How to engage industry with Technology Transfer initiatives. Most interested gathered the Commissions expectations towards the upcoming Call on Digital Innovation Hubs in Robotics.

Aside from this workshop organised by ROBOTT-NET, the project was presented by Jon Agirre Ibarbia (Tecnalia) in the workshop “How to establish and grow your robotic start-up?” on 13 March 2018 as well as by Kurt Nielsen (Danish Technological Institute) in the workshop on “Cascade funding for Robotics” and by Thilo Zimmermann (Fraunhofer IPA) in the workshop “Adapting robotics and related Industry 4.0 technologies for SMEs” both held on 14 March 2018.

This year’s edition of the ERF has brought together, under the theme "Robots and Us", over 900 attendees from robotics academia and industry and hosted over 50 workshops cover current societal and technical themes, including human-robot-collaboration and how robotics can improve industrial productivity and service sector operations.